Leaders of the five BRICS nations agreed on the structure of a $50 billion development bank by granting China its headquarters and India its first rotating presidency, according to a summit statement. Brazil, Russia and South Africa were also granted posts or units in the new bank. 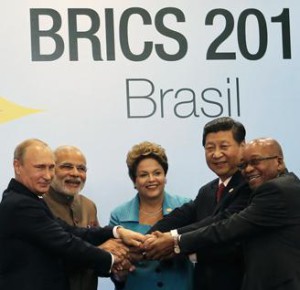 The leaders also formalized the creation of a $100 billion currency exchange reserve, which member states can tap in case of balance of payment crises, the leaders of the five nations said at a meeting in Fortaleza, Brazil. Each member country has the right to withdraw different amounts from the joint currency reserves, according to a statement from Brazil’s central bank. China can withdraw half of its contribution or $20.5 billion. Brazil, Russia, and India may withdraw their entire contribution or $18 billion, while South Africa can tap $10 billion, twice its input.

Both initiatives are designed to provide an alternative to financing from the International Monetary Fund and the World Bank, where BRICS countries have been seeking more say. The measures coincide with a slowing of economic growth in the five countries to about 5.4 percent this year from 10.7 percent in 2007.

According to an expert, the biggest winner among the BRICS and its newly created bank may be South Africa, as it stands to gain financial expertise, investment and trade.